Got thinking the other day how grateful I am that my life entails creating things so often . . . and then I got thinking this morning that really anything can be seen that way if we choose to. Take reading for example: it could be seen as both intake and output, the output being the creation of knowledge within oneself. Take serving at a restaurant for example: it could be seen as creating an experience. I think I take time to reflect on this simply as a measure of continuing to cultivate mindset as a tool.

I also got thinking this morning how unsafe it can feel to live in a place where any damn person could be carrying a gun. When on my morning walk, someone pulled over and was screaming at someone, either in the car with them or over the phone, and it really put me on guard. On one hand, I wanted to reroute my walk in hopes reminders of other people around would calm this person down, and on the other hand, I was scared to, and for some reason, this made me think he could have a gun and could use it. Highly unlikely? Yes. Did it pass through my mind? Yes.

This feels of substance on its own, but also in the light of what I'm hoping to get toward writing about today: my experiences in Japan. After the thought of 'gun,' my head immediately went to how unlikely it'd be that I'd think such I thing in Japan. First of all, it's very unlikely someone would scream in the car on the street. In fact, it seems very unlikely that anyone would scream in their own home. Or anywhere, really. Which seems really great. And really terrible. As I write this, it occurs to me that while its VERY unlikely anyone would scream anywhere or have a gun at all (crime rates are SUPER low in Japan and we felt safe everywhere we went), Japan's suicide rates are among the higher of the world's countries, and I wonder about how much that has to do with the societal pressure to 'rank and file' and never really act out. 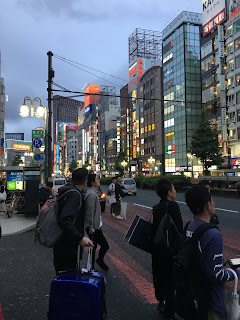 This feels likely to be a big part of what causes such outrageous fashion trends there (and signs in my relatively obsessive casual research during and after the trip point to this being true). I found that at first I LOVED the orderly sense about everything in Japan. The queuing system for the subways. The infrastructure created for umbrellas. The quietness in public spaces. That said, after about a week, I started wondering about and observing the down-sides of the orderliness. Strict gender roles. Lack of variance in public personality (at least from the standpoint of a foreign visitor who admittedly didn't know much about the culture/s going into the trip and can't pro port to be any kind of expert now). Fulfilled expectations of life-sucking work at the same company for your entire career. Yowza.

I found myself looking up things like "What kind of careers do Harajuku Girls pursue?" and "Karoshi," which is the Japanese term for 'death from overwork.' Yes, there is a term for that. While I loved learning about the fashion and experiencing the food (and how my expectations of it were met by its realities) and the onsens (oh, the natural hot spring onsens!) and the way temples and shrines are folded into every expected and unexpected corner, I was also taken with their challenges.

Usually when I travel, I am easily swept up by a new culture, and for a week of this trip, I was. I think I'm starting to realize how interesting and important it is to take in all aspects of something new, not just the good ones (even if you are a rosy-glasses kinda gal like me). Further evidence that the idea of gray matter and not just yin and yang is pretty solid? It was pretty refreshing to be both swept away by experiencing a culture new to me, and to also be able to against it, appreciate the one/s in which I belong. By the time we came home, I was feeling pretty grateful to be able to dress really however I wish, to be able to raise my voice or laugh loudly in public, to be able to pursue a work-life balance . . . Of course when I say these things, I do bear in mind 1) that the 'be able to's are not literal, but come from a place regarding societal pressures, and 2) that the outcomes of societal pressure are not distributed equally or in the same ways upon all people in a culture or in related cultures. It was just interesting to reflect on similarities and differences between the cultures I'm a part of and the ones I experienced. To me, there are positives and negatives within all, as I'm really coming to believe is true of nearly all things.

Back to that yin and yang thing. Apt, I think, considering the development of Japan's culture/s was and deeply influenced by Chinese and Korean ideas. Spirituality was so present in Japan, perhaps more so physically than any other way. While a great deal of Japanese citizens do not really consider themselves 'practicing religious,' per say, many of them DO consider themselves spiritual, regularly visiting neighborhood and iconic shrines to take a moment with certain gods regarding certain things. I find it totally fascinating that spirituality can take that shape. As someone who would not balk at being labelled 'spiritual but not religious,' I appreciate the idea that these aged temples and shrines can still hold relevance for people like me. 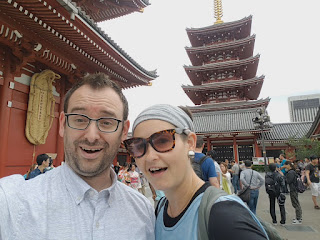 Me and Kris at the Senso-Ji Temple in Asakusa, Tokyo 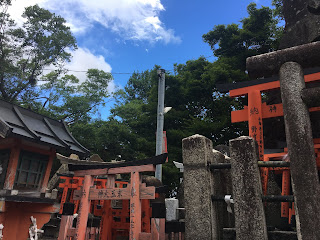 The top of the Fushimi-Inari Shrine

I find such relevance in my time in nature, in which I try to pause my whirring thoughts and instead just listen to and develop appreciation in the moment/s. That doesn't seem so far away from the over-holdings of Shinto, the so-called pagan religion of Japan that informs the life of many Japanese 'spiritual but not religious' folks. In a way, I'm disappointed that nature or life-in-general worship here does not have such ornate and fascinating buildings and monuments to aid it. In another (I think larger) way, I'm sort of glad. For me, it feels the least false and most true to go outside of myself to natural surroundings to go back within myself to appreciate those we've built. 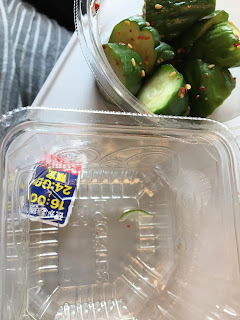 That's some big stuff. Smaller things I wish to call out include PICKLES AT NEARLY EVERY MEAL. PICKLES OF ALL KINDS! I'm here for it. Places to put your umbrella. Everywhere. The general kindness of so many strangers we came across (well, that seems like a big one). So, back to big stuff!

I noted in my last set of writing my wish to address how clearly the need for self-regulation of using the internet was made on this trip. With unlimited wifi came both comfort in travel and the discomfort of knowing that I could be made more comfortable whenever I felt like it by just looking stuff up, when one of the best by-products of travel is being made UNcomfortable for while. Discomfort in the sense of shake-up from routine. Routines are awesome, they help us be really comfortable and productive, and that's great, but productivity is NOT the only state of being that matters. Comfort can only go so far in the human experience. (the right kinds and amounts of) Discomfort can help us question our norms and to push at them in ways that keep us moving toward better. Back to unlimited access to the internet: being able to just look up whatever I was curious about both aided in my learning and took away some of the discomfort and mystery. About a week into the trip, I found myself starting to feel disillusioned by always being able to get the/ an answer about my curiosities, rather than just letting them float within my head, promoting the beautiful mystery of being a human living on this planet. It's been a big take-away for me, that I hope I will actively hang onto, to routinely recognize when I should just put my damn phone away and be left with some wondrous questions and ongoing inquiry. 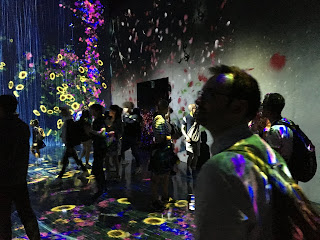 I'll also call out being able to recognize my own tendency toward cultural reductionism. It seems as humans, we really want to make sense of everything nearly all the time, and a seemingly easy way to do this is to reduce a topic to simplicity in order to chew on and digest it. This seems both helpful and really dangerous. In relation to my trip to Japan, I realized pretty quickly that I had a specific picture of how the whole country is (packed, urban spaces with all people bustling to and from their jobs), and hadn't really considered that it would look and feel different in different areas, just like the US or anywhere else, really. It was interesting to learn that while Japan is the geographic size of one California or two Minnesotas and is 75% uninhabitable due to mountains, it STILL has really varying cultures. Part of this is because it manages to hold an equivalent of a third of the population of the United States (that's a lot of people!) and another part is due to how it sits geographically. The Northwest region of the country (which we didn't get to see) is mountainous and known for their winter culture. Tokyo and Osaka have their big-urban-living thing going for them, and Kyoto is known for it's wealth of history. The island of Okinawa and the Kamakura area just South of Tokyo both embody Japanese surf culture. I have to say I'm kind of embarrassed with myself for not really realizing ahead of the trip that there would be so many distinct cultures WITHIN Japan. It's a good thing I continue to seek opportunities to expand my mind: seems like, much like us all, it can use it! 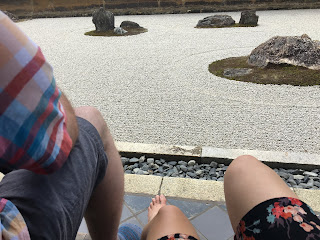 Me and Kris contemplating life at the Ryoan-Ji Zen Garden

I wish to acknowledge my hope that when I sat down to 'write about Japan,' I'd get it all out in one excellent essay and check that item off my list. That said, I eventually recognized, before I even started writing, that is a ridiculous expectation, and that I will be processing this experience for a long time. It'll come up at expected and unexpected times. And that's how I really think a good trip should hit you: for a good while. I'll be interesting to see how it continues to come up. I'll just have to be cognizant enough to notice :)
Posted by Erin+n Liebhard at 7:45 AM

I'm perpetually amazed by how many cultural variations and even dialects fit into Estonia, which is five times smaller than Minnesota and probably 30% uninhabitable because of bogs or most of the 1,000+ islands just being tiny spits of land with maybe just a shady juniper tree chilling there. Tune in to the huge Song Festival this weekend if you can!