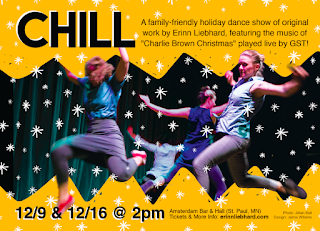 So many ways to think about this word. I really like this word. Hell, I've named my next show with this word. It's gotten me considering several things, all as a slew together: the subtle ways the weather shifts, the open-minded ways I approach a lot in my choreographic process (unexpected for me, looking in on it), the cools of the tap dancers I saw on Friday night - their chills were also their cools.

Parallels between chill and cool. Cool down. Chill out. In writing these things, my immediate thought was that these sayings are responses to people being "too emotional" or "too fired up." "Too" something. This connotation is somewhat of a bummer to me - I've long been someone who has prided herself on not being afraid to show an emotion or an opinion, and I think there is a valuable place in the self for willingness to react. That said, this observance of self has been shifting: as I continue to embrace the idea that personal identity is ever-changing, I'm thinking of myself as more and more even-keeled, open and interested in considering the grey matter (thanks Kris :) than I've been in the past. Bumped up against my feeling seen as "too cool and collected, needing to let vulnerability burst out" in grad school AND still as hot-headed at times among friends and family who have known me for a long time makes the influence of the perception of others a confusing contribution to self-perception.

Perhaps this is why I feel so surprised when I am so chill about so many things when I am creating: where the arms go, expression at this part . . . That said, there are things I am NOT chill about at all: rhythm in the feet, facings . . . This realization feels sort of like an artistic metaphor for the idea that we are not bound to one side of our Rubix Cube of personality. In actuality, its components are always shifting and creating new options because life is like that - it's a constant state of flux with many options for reaction. How short are we selling ourselves and others when we believe that our sides (choices, ideas, potentials for reaction) are fixed?

I have to admit that given it's contrast to definite-opinion, always-highly-specific Erinn (ex: rhythmic footwork), chill Erinn's approaches (ex: letting the upper body experience the rhythm in the lower body in a way that feels good and shows individuality) when making art are very exciting! It's just been interesting to realize this contrast and consider how it affects me not only personally, but professionally.

Watching the dancers in the Twin Cities Tap Festival showcase performance continued this loop on chill that I've been considering for the last couple months. Again, part of what drew/ draws me in is the emphasis put on sharing tools (tap shoes, particular rhythms, facings) but using them in entirely different ways according to individual approach (composition of groove in the body, the way it manifests, differences in dynamic). This is the stuff that makes vernacular dance so appealing to me: sharing tools to build community that encourages space for individuality within in it. I felt so inspired to get my tap shoes on, and hope I make good on that on 11/5 by attending Kallie's company's first class!

To close out: that chill in the air. It's a subtlety that causes both minor shifts, like in layers of clothing, and major change, like the setting off of a thunderstorm. Nature's perfect way of encapsulating the idea that maybe such extremes can and do live in harmony with one another, not only in the weather, but in us as well.

Posted by Erin+n Liebhard at 6:45 AM No comments:

Looking Back and In

This last week has seen me looking back and looking in quite a bit, all pushed by live performances. 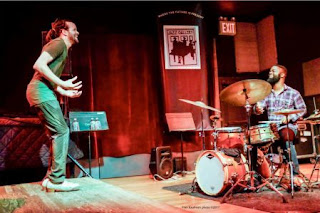 Coming here to look back and in, it was hard to see that I hadn't written here since Garrett. I guess that processing was all far more private than this might be. Just hard to see that date and think "pre-loss" and "post-loss." I wonder if it'll be that way forever? Probably not. I've lost others, but not like this. I don't have much more to say about that right now.

Beyond this: I came to write a post that reflects on my recent live music and performance experiences, and the above train of thought got me thinking about how I was at the Paul Simon concert at Eaux Claires while it was conspiring. Something felt really tender about that concert. Was it that? Life cycle. Aliveness in live music/ performance. Paired with me pondering WHY it's so important to me to go see live music and performance, it's really hitting home. Aliveness. Feeling the pulsing of the sound waves through your bodies and those around you. Experiencing this sweet sense of being in the moment while simultaneously experiencing the past, being brought there by a reliable soundtrack you've been able to count on at various times in your life. Transcending the weights and feeling weightless for a little while, like what keeps you down doesn't even exist for a bit. That last idea on it's own sounds a little dangerous, like escapism. Perhaps not when coupled with this: at it's best, live music and performance experiences allow you to escape momentarily to renew your juju, giving you a renewed sense of inspiration and purpose.

I definitely feel these things. They are why I keep coming back. They are why I wish that I prioritized seeing live music and performance more. But I'm making good on that. I've joined Setlist.fm as a way to track the live music I've seen, and I think seeing it all listed out like that is really going to be inspirational for me. It will require some work - I've already had to add shows - but I think it'll be worth it.

I think I've actually been having a really good year seeing live performance: music in particular, but I've also been trying to keep myself accountable for seeing more live dance too, which is surprisingly easy to bypass when you are a dancer yourself (well, sometimes it's WHY you end up opting out . . .). It was a New Years Intention for me to get myself back in the game with seeing live music and dance, so I'm glad I'm making good on it. "Don't wait for tomorrow" - thanks for having my back here, Hanson. Why wait? Go see stuff now. It's what I hope people are thinking when they are on the fence about coming to MY shows!

I've been approaching a lot lately with a mindset of "What else would I be doing?" At one point (and I'm likely to cycle through something similar again in my life), this would have been a dangerous outlook: I have a tendency to over-commit and under-enjoy because of that. After well over a year of working to change that, I felt myself go a little too far the other way, sometimes leaving too much time open or bypassing things that would have been awesome, cherish-able experiences in the name of not overextending myself. I guess sometimes it takes over-correction to eventually land in the middle.

I keep looking for that middle. Fortunately, that middle recently landed me seeing both both legendary tapper Savion Glover at local favorite jazz club The Dakota and Hanson at local favorite rock club First Ave in the span of less than a week. I'd had the Hanson tickets since March (the day they went on sale, to be exact), but the Savion show was an excellent last-minute decision. I'm glad I found the middle on that one :)   The details of the Savion show were both expected and unexpected. The set up of the solo musician and dancer, to me, seems like an excellent and obvious pairing. That said, it's not being done. Especially at that caliber. The fact they never took a break was definitely surprising to me, but it really worked. I actually loved being able to get absorbed in the moment without having to re-invest after a break. I do wonder if their stamina and aesthetic choices might have changed more if they had, but stamina at least didn't appear to be an issue. I hope this tour paves the way for more like this - I'm so glad the Dakota took a chance on a music and dance act: seems like it paid out for them too!

Next up: Hanson. I am NEVER disappointed when I go see these guys. After pondering it a bit, I think I've figured out that I've seen them a whopping seven times. And it took me until THIS year to see Radiohead. I guess I'm realizing that Radiohead and Hanson are my top two when it comes to bands. There is something to be said for the history you develop with a set of music: when you've liked a band for 14 and 20 years, respectively, their music comes along with you for major parts of your life, and that's no small thing. 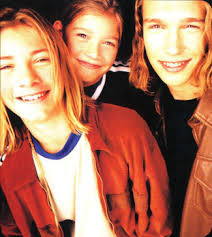 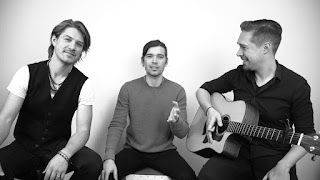 Back to how the show was: again, NEVER disappointed. And I actually don't think much of that has to do with the fact that I've been an in-it-for-the-music fan for at least 16 years (those first four were as much about relationship fantasies as they were the music). It also wasn't just because it was an opportunity to celebrate one of my best friend's birthdays and 20 years of our friendship (kindled over a mutual love of Hanson, of course!). They really just put on a killer show. As somewhat of a music snob, it made me believe in pop music again. It reminded me that great pop-rock-soul music can be just the tonic my spirit needs to keep space for joy (and sometimes pain!). 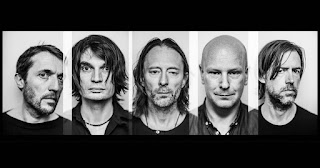 My behavior post-show also made me wonder what my teens years would have been like with YouTube. As I've told my concert pal, I really don't think we would have gotten anything done! I suppose I have to be glad YouTube didn't hit until I had developed a modicum of skill in self-regulation. Other post-show realizations: it's pretty cool to note that your teenage dreams were just that: teenage dreams. At 13, my ideal life included Taylor Hanson being my boyfriend. Now, I look in on their personal lives and realize that as a pretty liberal gal who has her own dreams and ambitions, many of their values do not match with mine. Sure, I kinda knew this, being that they've always been quite religious and conservative. After a little digging (yes, I watched a whole lot of video and read a whole lot of articles in this post-show, renewed-zeal-for-Hanson moment), I really knew.

In short, I'm glad for my continued zeal (plus some additional perspective gained via age) for not only Hanson in specific, but live music and performance in general. I hope to also continue holding myself to writing about my experiences. It's cathartic.
Posted by Erin+n Liebhard at 6:39 AM No comments: