My Next Journey Around The Sun: 2016 New Years Resolutions 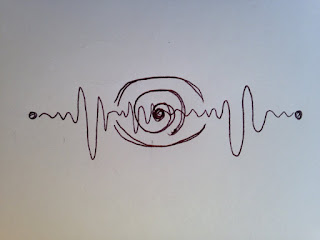 everything has always
is always
will always vibrate to live
atoms, frequencies, objects, people

Out of my new years reflections this year came the intention to embrace these concepts. The above image is my current way of reflecting all of this together in one gaze. Is it ideal? Probably not. Will it change? Probably. Given the content, both of these ideas are fitting. This is the most fluid new years reflection/ resolution outcome I have ever had. My initial illustration was more to take in than the above and it sort of stressed me out, though that is reflective of all these ideas too (my ability to handle complexity, my wish to, the idea that complex = too much instead of just what it is). Much to mine from these ideas.

Enjoyed it last year, going to give it another go this year!


1.) What did you do in 2015 that you'd never done before?
Put on a show in a bar, defended my masters thesis, performed in D.C., went to a concert at Red Rocks, graduated from grad school, GOT MARRIED, went to Italy and Spain. Just a couple little things :)

2.) Did you keep your new year's resolutions and will you make any for next year?
Of course!

5). What countries did you visit?
Italy, France and Spain on our honeymoon, also travelled to D.C. to perform and Elkins, West Virgina for American Vernacular Dance Week!

6.) What would you like to have in 2016 that you lacked in 2015?
I lacked prioritization of my scholarship and choreography in the end half of 2015, and I'd like to keep working actively toward space and time for that in 2016.

8.) What was your biggest achievement of the year?
Graduating AND getting married; tied! And my JODE article! I am already sensing how important it will be for me to not expect every year to be like this in order to consider myself successful and progressing.

9.) What was your biggest failure?
Not performing more in Mpls/ St. Paul; working on it.

10). Did you suffer illness or injury?
Actually, nothing monumental, besides a couple bizarre but small toe injuries!

11.) What was the best thing you bought?
Last year's post on that makes me giggle; those boots were gone in less than 6 months! In June, I replaced them with a pair of perfect Red Wings that will last forever that I love. I also think the wedding and honeymoon were good investments, and my foam roller!

12. Where did most of your money go?
See above!

13. What did you get really excited about?
See above above, morning routines and minimalism. And Walking Dead continued it's rein.

14. Compared to this time last year, are you happier or sadder? Thinner or fatter? Richer or poorer?
Generally jovial, but even more so, perhaps a little less fit than during grad school (working on that too), and had a couple costly investments to make but also entered into a two-income household, so I guess its sort of a wash?

15. What do you wish you'd done more of?
Dancing. Again. Going out, rehearsing, creating, MORE DANCING outside teaching.

16. What do you wish you'd done less of?
Watching TV. Again! But there is something about it (particularly being able to do this with Kris regularly again) that is also frustratingly satisfying.

17. How did you spend Christmas?
Turned the tables and did Liebhard's Christmas Eve and Olson's Christmas Day. It was awesome to get to spend some of the holidays with Larry, Net and the kids.

18. What were your favorite TV programs?
Walking Dead, Dr. Who is slowly losing prominence with us, and HGTV has taken a stronghold of what we tend to watch together!

19. What were your favorite books of the year?
Didn't read for pleasure nearly as much as I would have liked to. Read Tina Fey's autobiography and I Am Malala over this break, and I liked both very much for very different reasons!

20. What was your favorite music from this year?
I feel sad that I do not have an artist to discuss, but I will say that getting introduced to the Spotify 'Discover Weekly' feature that gets tailored to your tastes was awesome, and pretty instrumental in helping me have great instrumental music for modern class.

21. What were your favorite films of the year?
Not saying Star Wars would be lying. Additionally, I cannot remember much about the earlier end of the year in this regard.

22. What did you do on your birthday and how old were you?
30!!!! OH YEAH! That was a thing this year too. It's been a really big year. I had to teach this year, but we did an in-studio activity (Rosas Remix) and it was super-fun. Great way to start the day. I took the rest of the day and took myself to breakfast, did a little shopping and spent too much (which is VERY rare for me) including buying a kite! I flew my kite, had a nice late lunch/ early dinner and went to tech for The Current at CU. Kris got in late (but got there none the less) and we went to Darkhorse. Later that week, friends came to see the show and we grabbed drinks after. It was suitable. My 30th birthday had to take a backseat to the show, graduating and getting married. I think I forgot about my Valleyfair request. Perhaps I will make Kris take me for 31 this year :)

23. What one thing would have made your year immeasurably more satisfying?
More dancing. Again.

24. How would you describe your personal fashion concept in 2015?Layers, items that can transition easily from cute and presentable normal clothing to warm-up and classwear and back. A lot of choices revolved around those boots, short skirts and dresses are always a must. At the end of this year, I also got back into reading about minimalism and decided to overhaul my wardrobe; I took out all but about 80 pieces (not including underwear, outerwear, workout wear and accessories) and packed them all away. I'll leave them all packed until the end of this next semester and pull them back out at the beginning of summer to see if there is anything I wish to keep. I am imagining that Ill get rid of it all! I'm looking forward to doing this with my jewelry and other accessories too! I'm tired of having three of something that are ALMOST that one thing I really want instead of just having that one thing. Along the process of boxing, I also made a list of those (and some need staple pieces) to be looking for.

25. What kept you sane?
My morning routine (toward the end of the year). Having a purposeful beginning to each of my days feels really important for many reasons.

26. What was a valuable life lesson you learned in 2015?
Two: 1) probably a reiteration of the idea that 'it's not always you' and 2) a continuation of an idea I'll never 'get to' (it's not a thing) but will keep considering; balance. In the numerous ways I've come to phrase it. Another version coming up in my 2016 New Years Resolutions :)

Posted by Erin+n Liebhard at 11:50 AM No comments: