This year, I challenged myself to up my dance writing in the form of jotting down reflections of shows I see or dance experiences I have. This round of this challenge to myself, I will focus on the production Reflection House, a new work by choreographer Jennifer Glaws/ Jagged Moves. I'm familiar with her work, after almost ten years of seeing it evolve, and one of the things that struck me most was the clarity of her pathway forward as an artist.

I was able to see bits and pieces of ideas she's been chewing on for awhile, as well as new threads that have developed in the last couple of years to take her where she is headed. Regarding long-held ideas of focus, I saw Glaws playing with soundscapes driven by heavy beats made into a full aural pallet by way of a network of interesting sound effects derived from everyday life and fantasy, webbed around one another. This made way for the dancers (who were stunning) to weave in and out of the sound, sometimes interacting with it directly and other times existing alongside it.

Another idea I feel she's been exploring and continues to examine is the interplay of solo movement themes that build into duets and exist amongst the action of the full group of performers. This framework landed particularly well within the life of this production's concept, the exploration of how humans yearn for self and group understanding or fit. Glaws' program note included terminology "selected and collected identity," which I found to be particularly revealing when viewing this new work. The dancers moved through this idea with equal measures of groundedness and inquiry, embodying the human experience of being equal parts confidence and questioning, not only of the world around us but how we move ourselves within it.

A relatively emerging aspect of Jennifer's artistry is further building the world her choreographic work moves within by way of video technology. She made interesting use of pre-created images, including silhouettes of bodies in interesting shapes, which dancers attempted to fit themselves into and around, as well as live video capture and projection, which snagged visuals of dancers moving through the moment we were experiencing together, once removed by a camera. Also incorporated were sketch-like visuals that shifted throughout the room as the dancers teetered back and forth from one side to another, one raised platform to the next.

Another creative element that felt new to me in experiencing Jennifer's work was the very physical incorporation of set. The space had been molded from an open gallery in a multi-artist studio building (a very ingenuitous find for a performance location) into a veritable adult playground. While the ramps and platforms and walls were stark white, they very much created a simultaneous sense of obstacle and play, speaking to the concept of the work. They provided complicated and intriguing surfaces for not only the dancers to experiment with, but for video projection experimentation as well.

I'd like to come back to those stunning dancers. These performers were very much in it in self and their group while also connecting with viewers in a way that felt genuine and of them moment, rather than put on or directed as clear audience engagement can sometimes feel. They were raw in their physicality, attentive in their listening to the sound, each other and the space and generally just a kinesthetic thrill. Of particular note was the solo section performed by Mirabai Miller, through which she twisted to, accented and offered question of a segment of spoken text addressing the course of self development and internal and external perception. With a wide range of physicality and dynamic in both choreography and performance, this section is still imprinted on my mind days later.

As a whole, Reflection House was an intriguing next step in the formation of Glaws' artistic voice, and one that I'm likely to continue pondering. She weaved together a great deal of production elements in a way that they felt cohesive and fully-supportive of her exploration, yet left me with unsolved inquiries about the sense of "selected and collected identity" it got me thinking about and feeling.
Posted by Erin+n Liebhard at 5:52 AM No comments:

Dance to the Music

I had the pleasure of hearing live music TWICE yesterday, both somewhat unexpectedly. 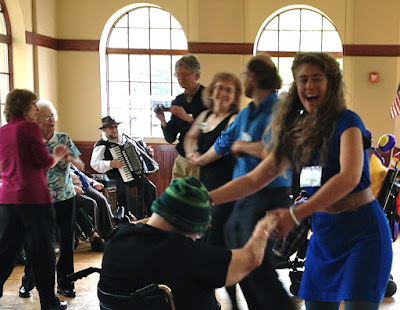 The first time was at an Intergenerational Dance Hall put on by Twin Cities-based organization Kairos Alive! They have over 20 years of experience putting on events that welcome people of all ages, backgrounds and experience levels to enjoy dancing with one another (thus the title). I have been curious about checking this organization out, but didn't get to it until it was on my list as an evaluator for the Minnesota State Arts Board. I'm now feeling really sorry I haven't gotten to one sooner: it was incredible.

Artistic Director Maria Genne, who was the primary facilitator, made a comment to the group about halfway through that folks used to dance together as a regular pastime and that this group is working to offer that opportunity once again. It really got me thinking again (I believe I think about this on at least a weekly basis) about how elements of popular culture have their hey-day and then become niches to which people dedicate themselves. I'm sure there are things that fade into complete obscurity, but it seems to me that for the most part, things find their dedicated audiences beyond their time of popularity, and live on with those folks.

While it makes me sad when I think that social dance has in certain ways "fell victim" to this, I'm trying to encourage myself not to see it that way. Instead, I'm working to reframe it in my mind to understand how such intergenerational dancing, led by a shared set of accessible knowledge for each type of dance, is finding it's own niche home, just like swing dance.

Reflecting back on the week, I'm proud that I made it to the swing dance, went to the Intergenerational Dance Hall and heard music there, AND out at Day Block Brewing for a friends birthday. I chalked up to two social dance experiences and two live music experiences in one week! AND I danced my booty off at Pigeons Playing Ping Pong last weekend too. ALSO - this week will end up being a two dance show week as well, having seen St. Paul Ballet last night and seeing Jennifer Glaw's Reflection House today. It's ridiculous to me how hard it can be to hold yourself accountable to doing things you enjoy, just because they require an interruption of habit (or perhaps more like it, a building of habit around them). Getting off topic. Just glad to be holding myself accountable to these New Years Intentions/ Desires.

Back to Kairos/ the swing dance. Both of these events had very real audience numbers. Beyond that, they were both genuinely diverse in so many ways. I opt to say "genuinely" because sometimes you can feel when it's been somewhat forced, an achievement of an organizational goal rather than a result of honest to goodness interest in the programming. Both these events had genuine-ness dripping off them from everywhere! It took me a little time to warm to the Intergenerational Dance Hall, as it started with really simply prompts for the kids in attendance (which was totally appropriate to the situation). It took me until getting to my car to realize that starting that way not only was the right accommodation for their audience that day, but also allowed the facilitators to build the entire thing up in energy so that by the time it came to a close, we were bursting out the ceiling together in joy.

And to social dance to an ensemble of INCREDIBLE live musicians at 10am on a Saturday (not to mention in the American Swedish Institute, a cultural gathering place I've never been to, and with such a diverse group of warm and wonderful strangers to boot): downright magical. I sincerely cannot WAIT to go to another one of Kairos' events. In fact, I'm going to put them on my calendar after I finish this post.

My second live music experience yesterday was listening to OVRFWD at Day Block Brewing, upon invitation from a friend for her birthday. It was a joy to stand and listen. Generally, I let my body take over and really get some dancing in, but this music didn't ask for that and that was ok. My body of course had it's reactions, they were just less pronounced than they might be with more "dancey music." I found myself listening in for the meter, for structure and improvisation, visually taking in the ways the guitar players physicalized their riffs. I also found myself describing the music like "acid jazz on metal," in response to my friend saying that it sounded like "jazz on acid." I'm not sure if this makes me pretentious or awesome or both. Probably both.

Anyway, I just really enjoyed my time standing (and swaying a bit) and listening. It gave me a renewed respect for the standing (and swaying) folks I often look at and wonder if they are having any fun. They are. The fun is just happening primarily in their heads. I think there is something to be said for letting the body take over, but I also think there is something to be said for being so focused that the body is taken in more stillness.

I had a lot of other things rolling around in my mind this morning (looking at differences in loss, between now and when I was much younger, thinking about lifestyles in different areas of the country, seeing the bits of quirk that poke out of my mostly pristinely-organized and streamlined home as a physicalization of my approach to artistry and movement - cool and confident and reserving quirk for when it's most effective), but I'm feeling satisfied with what has come out (and hungry!).

Looking forward to more viewing, doing and hearing of dance and music, starting with Jen's show in a couple hours. perhaps the house session tonight and They Might Be Giants on Thursday with Kris!
Posted by Erin+n Liebhard at 10:04 AM No comments: